Netherlands international Frenkie de Jong has revealed that Barcelona had provided him assurance of regular gametime in order to acquire his signature. The Ajax midfielder had been fancied to join Paris Saint-Germain in a pre-contract agreement earlier in the month but in a strange change of events, the Blaugrana managed to pursue his services. 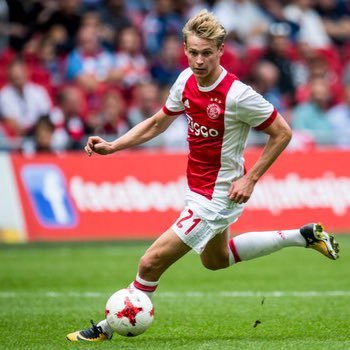 In a report covered by Marca, De Jong acknowledged that it would be difficult to break into the first-team squad of the Catalan giants, once he makes the switch to the club during the summer. However, he added that assurances were offered regarding the gametime and he expects opportunities to impress with the first-team, he said:“I know that it will be difficult to break into the first-team, but the club have said all of the right things and have made it clear that I will get my chance.”

The Catalan giants had initially sought to pursue the Dutchman during the summer transfer window but a deal failed to materialise with Ajax keen on keeping hold of the midfielder for one more seasons. The same stance prevailed with the turn of the year but the Blaugrana eventually found the breakthrough with the Amsterdam-based club after finalising an agreement whereby the Dutchman would head to the Camp Nou during the summer.

At present, “the reigning Spanish champions are well stocked in the centre of the park but the arrival of De Jong may witness the departure of one of the current regulars“. Ivan Rakitic, who has “become a fundamental player“ under Ernesto Valverde has recently been touted as the midfielder under risk of the chop with Paris Saint-Germain seemingly keen on landing him.

The French giants had made an approach to sign the Croatia international last summer and they could come up with a fresh proposal in the forthcoming months, considering Adrien Rabiot appears certain to leave Parc des Princes when his contract expires at the end of the campaign.